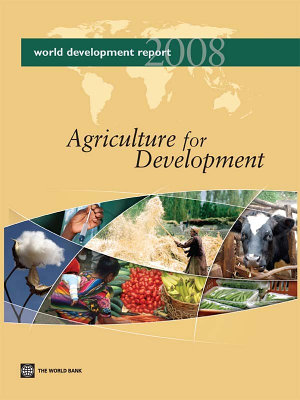 The world's demand for food is expected to double within the next 50 years, while the natural resources that sustain agriculture will become increasingly scarce, degraded, and vulnerable to the effects of climate change. In many poor countries, agriculture accounts for at least 40 percent of GDP and 80 percent of employment. At the same time, about 70 percent of the world's poor live in rural areas and most depend on agriculture for their livelihoods. 'World Development Report 2008' seeks to assess where, when, and how agriculture can be an effective instrument for economic development, especially development that favors the poor. It examines several broad questions: How has agriculture changed in developing countries in the past 20 years? What are the important new challenges and opportunities for agriculture? Which new sources of agricultural growth can be captured cost effectively in particular in poor countries with large agricultural sectors as in Africa? How can agricultural growth be made more effective for poverty reduction? How can governments facilitate the transition of large populations out of agriculture, without simply transferring the burden of rural poverty to urban areas? How can the natural resource endowment for agriculture be protected? How can agriculture's negative environmental effects be contained? This year's report marks the 30th year the World Bank has been publishing the 'World Development Report'.

Authors: World Bank
Categories: Business & Economics
The world's demand for food is expected to double within the next 50 years, while the natural resources that sustain agriculture will become increasingly scarce

Authors: World Bank
Categories: Business & Economics
'Global Monitoring Report 2008', the fifth in an annual series, is essential reading for those who wish to follow the global development agenda and debate in 20