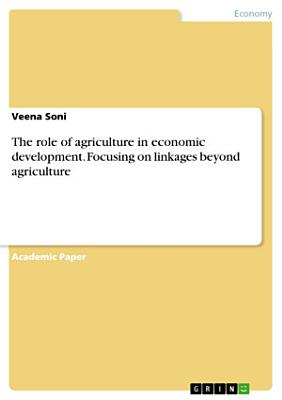 Academic Paper from the year 2020 in the subject Economics - Economic Cycle and Growth, , language: English, abstract: Those of us who preach the gospel of agriculture with evangelical zeal find the text compelling and convincing. We are regularly possessed by the spirit only to look around and see out colleagues, in other sectors, in country management, or even our senior management doubting, yawning or subtly edging towards the door. We face the implicit query, “If agriculture can do such great things, why have they not yet happened?” The past decade has been one of agro-pessimism. The promises that agricultural development seem to hold did not materialise. This pessimism seemed to coincide with pessimism about Sub-Saharan Africa. Especially for Sub-Saharan Africa the hope was that economic development would be brought about by agricultural development. After the success of the green revolution in Asia, the hope was that a similar agricultural miracle would transform African economies. But this hope never materialised, agricultural productivity did not increase much in SSA, and worse, the negative effects of the green revolution in Asia became more apparent, such as pesticide overuse and subsequent pollution. Also in Asia the yield increases tapered off. The sceptics put forward several arguments why agriculture is no longer an engine of growth. For instance, the liberalisation of the 1990s and greater openness to trade has lead to a reduction in the economic potential of the rural sector: cheap imported Chinese plastic buckets out compete the locally produced pottery. On the other hand, it does mean cheaper (imported) supplies. With rapid global technical change and increasingly integrated markets, prices fall faster than yields rise. So, rural incomes fall despite increased productivity if they are net producers. The integration of rural with urban areas means that healthy young people move out of agriculture, head to town, leaving behind the old, the sick and the dependent. It is often also the men who move to urban areas, leaving women in charge of the farm. This has resulted in the increased sophistication of agricultural markets (and value chains) which excludes traditional smallholders, who are poorly equipped to meet the demanding product specifications and timeliness of delivery required by expanding supermarkets. The natural resource base on which agriculture depends is poor and deteriorating.

The role of agriculture in economic development. Focusing on linkages beyond agriculture

Authors: Veena Soni
Categories: Business & Economics
Academic Paper from the year 2020 in the subject Economics - Economic Cycle and Growth, , language: English, abstract: Those of us who preach the gospel of agri

Authors: Fabrizio Bresciani
Categories: Technology & Engineering
The importance of agricultural growth to poverty reduction is well known, but the specific channels through which the poor can take advantage of growth require

Agriculture and undernutrition through the lens of economics

Beyond the business case for agricultural value chain development: An economywide approach applied to Egypt

Authors: Asian Development Bank
Categories: Business & Economics
This report explores potential links between the agriculture and tourism sectors that could strengthen infrastructure development and inclusive growth in the La

Authors: World Bank
Categories: Business & Economics
An innovation system can be defined as a network of organizations, enterprises, and individuals demanding and supplying knowledge and bringing it into a social

Authors: Agnes R. Quisumbing
Categories: Business & Economics
The Food and Agriculture Organization of the United Nations (FAO) produced a 2011 report on women in agriculture with a clear and urgent message: agriculture un

Authors: Judith Möllers
Categories:
The current discussion regarding the reform of the Common Agricultural Policy (CAP) is challenging due to the varying needs and interests of the old and new mem

Authors: OECD
Categories:
These conference proceedings explore why policy coherence is important, how it affects global agricultural trade, and whether it can help reduce poverty and hun