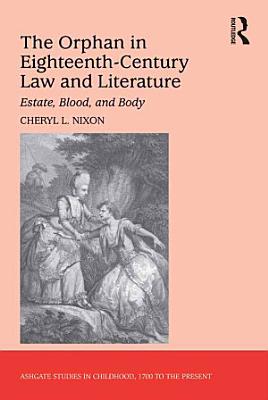 Cheryl Nixon's book is the first to connect the eighteenth-century fictional orphan and factual orphan, emphasizing the legal concepts of estate, blood, and body. Examining novels by authors such as Eliza Haywood, Tobias Smollett, and Elizabeth Inchbald, and referencing never-before analyzed case records, Nixon reconstructs the narratives of real orphans in the British parliamentary, equity, and common law courts and compares them to the narratives of fictional orphans. The orphan's uncertain economic, familial, and bodily status creates opportunities to "plot" his or her future according to new ideologies of the social individual. Nixon demonstrates that the orphan encourages both fact and fiction to re-imagine structures of estate (property and inheritance), blood (familial origins and marriage), and body (gender and class mobility). Whereas studies of the orphan typically emphasize the poor urban foundling, Nixon focuses on the orphaned heir or heiress and his or her need to be situated in a domestic space. Arguing that the eighteenth century constructs the "valued" orphan, Nixon shows how the wealthy orphan became associated with new understandings of the individual. New archival research encompassing print and manuscript records from Parliament, Chancery, Exchequer, and King's Bench demonstrate the law's interest in the propertied orphan. The novel uses this figure to question the formulaic structures of narrative sub-genres such as the picaresque and romance and ultimately encourage the hybridization of such plots. As Nixon traces the orphan's contribution to the developing novel and developing ideology of the individual, she shows how the orphan creates factual and fictional understandings of class, family, and gender.

Authors: Andrew O'Malley
Categories: Literary Criticism
The essays in this volume offer fresh and innovative considerations both of how children interacted with the world of print, and of how childhood circulated in

Authors: Kieran Dolin
Categories: Literary Criticism
Law and Literature presents an authoritative, fresh and accessible new overview of the many ways in which law and literature interact. Written by a team of inte

Authors: Diane Warren
Categories: Literary Criticism
Rereading Orphanhood: Texts, Inheritance, Kin explores the ways in which the figure of the literary orphan can be used to illuminate our understanding of the cu

The Orphan in Fiction and Comics since the 19th Century

Authors: Marion Gymnich
Categories: Literary Criticism
The orphan has turned out to be an extraordinarily versatile literary figure. By juxtaposing diverse fictional representations of orphans, this volume sheds lig

Colonial Law in India and the Victorian Imagination

Authors: Anja Müller
Categories: Literary Criticism
Through case studies from diverse fields of cultural studies, this collection examines how different constructions and concepts of identity were mediated in Eng