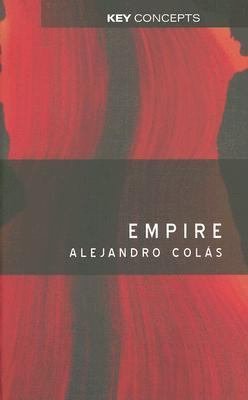 The notion of empire has in recent years taken on a renewed importance in world politics. US foreign policy has in particular been associated with this concept by both critics and supporters of American global power. But what exactly is an empire? What distinguishes different forms of empire? Is this category still useful in a post-colonial world? These and other related questions are addressed in this historically informed conceptual introduction to the idea of empire. Alejandro Colás draws on interdisciplinary debates surrounding this disputed notion and offers a survey of different imperial experiences across time and place. Successive chapters consider the imperial organization of political space, the role of markets in sustaining imperial rule and the contradictory expressions of imperial culture. Colás argues that in each of these arenas we can establish differences among empires but also contrast imperial polities to other forms of political rule. In addition he suggests that the experiences and legacies of empire are key to an understanding of the world today, including forms of global governance and experiments in nation-building. Using wide-ranging examples, the book discusses some of the major theories of empire and imperialism in an accessible and engaging way. Above all, the text aims to bring the concept of empire alive to those concerned with contemporary world politics and society. It will be of great interest to those studying and teaching world history, international relations, comparative politics or global sociology.