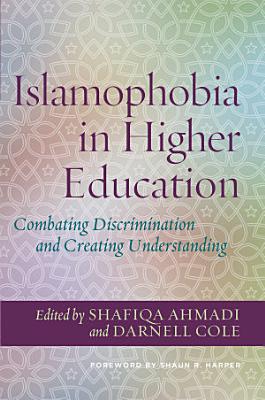 While Islamophobia was present in our society before 9/11, it has become more pervasive in recent years. This is evidenced by the current social and political climate, hate speech and hate crimes directed at Muslims, and the Supreme Court’s upholding of Presidential Proclamation 645 that effectively bans Muslim immigration from coming to the U.S. What does this mean for Muslim students in college, and indeed for institutions of higher education as they navigate law and policy on the one hand and adhere to their mission of achieving inclusive and equitable educational environments on the other? Two thirds of Muslims in the U.S. are vexed with current policy, and there has been an alarming increase in reports of bigotry and discrimination against them since the 2016 presidential elections. The fear of Islam, in general, and Muslims, specifically, not only compels non-Muslims to differentially treat Muslims, but also trade some of their own civil rights and civil liberties under the guise of national security. To address these issues, institutions require a nuanced understanding of laws and policies that institutionalize Islamophobia, and a greater understanding of the diverse college students that identify as Muslim. This book fills what has been a dearth of research that explores the experiences and navigation of Muslim students in colleges and universities, and addresses the even less studied domain of the experiences of Muslim students who hold multiple marginalized identities -- such as race, ethnicity, and LGBTQ status – as well as the intersection of those identities that may create multiple burdens of oppression and discrimination. This book begins by critically engaging with how current laws and policies institutionalize Islamophobia and affect the intersectionality and diversity within the Muslim community. It includes multidisciplinary voices, such as an international human rights attorney, a civil rights attorney, a criminal law attorney, student affairs practitioners, and research faculty whose work on this marginalized student population are traditionally not recognized within academic settings; and brings the voices of female Muslim scholars to the fore. Each chapter includes a critical analysis of the literature, a legal analysis when appropriate, a set of recommendations for policy and practice, and discussion questions.

Authors: Shafiqa Ahmadi
Categories: Education
While Islamophobia was present in our society before 9/11, it has become more pervasive in recent years. This is evidenced by the current social and political c

Authors: Jason Arday
Categories: Education
This book reveals the roots of structural racism that limit social mobility and equality within Britain for Black and ethnicised students and academics in its i

Research in the Social Scientific Study of Religion, Volume 32

Authors:
Categories: Religion
The present volume explores lesser-heard and unheard issues in the study of religion. Among other things, lived experiences of religion in higher education are

Authors: Ziauddin Sardar
Categories: Religion
The Reform in Higher Education in Muslim Societies is in sum a paradigm shift in perspective driven by important considerations including the aims of education

Authors: Marybeth Gasman
Categories: Education
The latest text in the Core Concepts in Higher Education series, this volume speaks to the complex dimensions that higher education scholars and educators need

Being an Effective Programme Leader in Higher Education

Deconstructing the Myths of Islamic Art

Authors: Onur Öztürk
Categories: Art
Deconstructing the Myths of Islamic Art addresses how researchers can challenge stereotypical notions of Islam and Islamic art while avoiding the creation of ne

Authors: Ziauddin Sardar
Categories: Religion
The Reform in Higher Education in Muslim Societies is in sum a paradigm shift in perspective driven by important considerations including the aims of education

Authors: Alison Scott-Baumann
Categories: Religion
Islam on Campus explores how Islam is represented, perceived and lived within higher education in Britain. It is a book about the changing nature of university