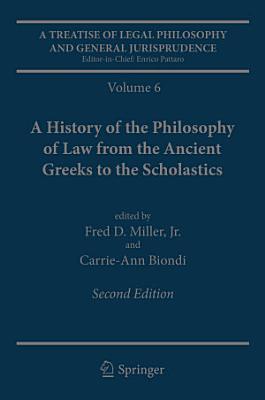 The first-ever multivolume treatment of the issues in legal philosophy and general jurisprudence, from both a theoretical and a historical perspective. The work is aimed at jurists as well as legal and practical philosophers. Edited by the renowned theorist Enrico Pattaro and his team, this book is a classical reference work that would be of great interest to legal and practical philosophers as well as to jurists and legal scholar at all levels. The work is divided in two parts. The theoretical part (published in 2005), consisting of five volumes, covers the main topics of the contemporary debate; the historical part, consisting of six volumes (Volumes 6-8 published in 2007; Volumes 9 and 10, published in 2009; Volume 11 published in 2011 and Volume 12 forthcoming in 2015), accounts for the development of legal thought from ancient Greek times through the twentieth century. The entire set will be completed with an index. Volume 6: A History of the Philosophy of Law from the Ancient Greeks to the Scholastics 2nd revised edition, edited by Fred D. Miller, Jr. and Carrie-Ann Biondi Volume 6 is the first of the Treatise’s historical volumes (following the five theoretical ones) and is dedicated to the philosophers’ philosophy of law from ancient Greece to the 16th century. The volume thus begins with the dawning of legal philosophy in Greek and Roman philosophical thought and then covers the birth and development of European medieval legal philosophy, the influence of Judaism and the Islamic philosophers, the revival of Roman and Christian canon law, and the rise of scholastic philosophy in the late Middle Ages, which paved the way for early-modern Western legal philosophy. This second, revised edition comes with an entirely new chapter devoted to the later Scholastics (Chapter 14, by Annabel Brett) and an epilogue (by Carrie-Ann Biondi) on the legacy of ancient and medieval thought for modern legal philosophy, as well as with updated references and indexes.

A Treatise of Legal Philosophy and General Jurisprudence

Authors: Fred D. Miller Jr.
Categories: Law
The first-ever multivolume treatment of the issues in legal philosophy and general jurisprudence, from both a theoretical and a historical perspective. The work

Authors: William Twining
Categories: Law
This book explores the implications of globalisation for the theoretical study of law, justice, and human rights.

The Province of Jurisprudence Determined

Index-catalogue of the Library of the Surgeon-General's Office ...

Index-catalogue of the Library of the Surgeon-General's Office, United States Army

The Law Magazine Or Quarterly Review of Jurisprudence

Authors: Roger Cotterrell
Categories: Law
This book presents a unified set of arguments about the nature of jurisprudence and its relation to the jurist’s role. It explores contemporary challenges tha

The Institutes of Justinian