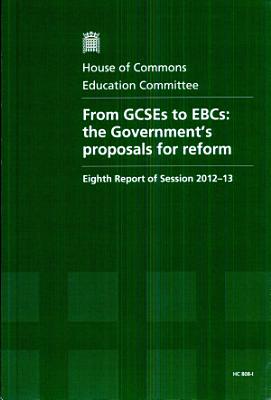 The Government's plans for replacing GCSEs with new English Baccalaureate Certificates in some subjects is trying to do too much, too fast. Introducing several fundamental changes at the same time and to a tight timetable will jeopardise the quality of the reforms and may threaten the stability of the wider exam system. GCSEs need "significant improvements" in order to restore public confidence in the exam system, but the Government still needs to make the case that the GCSE brand is so discredited that it is beyond repair. MPs are also concerned about the impact of the changes on subjects outside the English Baccalaureate, where students will be taking GCSEs for some time to come, according to the Government's plans. The report also questions how well the Government's proposals will serve lower attaining pupils, who are often the most disadvantaged. There is no evidence that the proposed changes will help to tackle under-achievement or narrow the attainment gap between the richest and poorest students any more effectively than GCSEs. The Government is also called upon to re-think its plans for a Statement of Achievement specifically for lower attaining pupils. MPs agree that changes are needed to the way in which exams are run, but they raise serious concerns about franchising subjects to exam boards. The report is critical of the Government's decision to abolish some GCSEs before publishing the outcomes of the National Curriculum Review and its proposed changes to the school accountability system. MPs also note the wide-ranging stakeholder opposition to many of the Government's proposals.