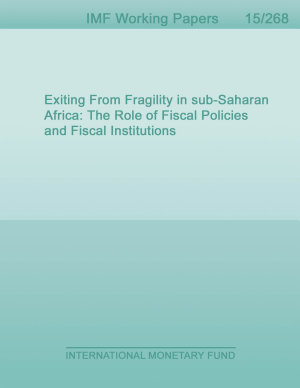 This paper studies the role of fiscal policies and institutions in building resilience in sub-Saharan African countries during 1990-2013, with specific emphasis on a group of twenty-six countries that were deemed fragile in the 1990s. As the drivers of fragility and resilience are closely intertwined, we use GMM estimation as well as a probabilistic framework to address endogeneity and reverse causality. We find that fiscal institutions and fiscal space, namely the capacity to raise tax revenue and contain current spending, as well as lower military spending and, to some extent, higher social expenditure, are significantly and fairly robustly associated with building resilience. Similar conclusions arise from a study of the progression of a group of seven out of the twenty-six sub- Saharan African countries that managed to build resilience after years of civil unrest and/or violent conflict. These findings suggest relatively high returns to focusing on building sound fiscal institutions in fragile states. The international community can help this process through policy advice, technical assistance, and training on tax administration and budget reforms.

Exiting From Fragility in sub-Saharan Africa

Exiting From Fragility in Sub-Saharan Africa

Authors: Corinne Del?echat
Categories:
This paper studies the role of fiscal policies and institutions in building resilience in sub-SaharanAfrican countries during 1990-2013, with specific emphasis

Authors: David Carment
Categories: Political Science
State fragility is a much-debated yet underinvestigated concept in the development and international security worlds. Based on years of research as part of the

Authors: International Monetary Fund. African Dept.
Categories: Business & Economics
Growth in sub-Saharan Africa has recovered relative to 2016, but the momentum is weak and per capita incomes are expected to barely increase. Further, vulnerabi

Authors: International Monetary Fund. African Dept.
Categories: Business & Economics
The region is seeing a modest growth uptick, but this is not uniform and the medium-term outlook remains subdued. Growth is projected to rise to 3.4 percent in

Authors: International Monetary Fund. African Dept.
Categories: Business & Economics
Economic growth in sub-Saharan Africa this year is set to drop to its lowest level in more than 20 years, reflecting the adverse external environment, and a lac

Authors: International Monetary Fund. African Dept.
Categories: Business & Economics
Economic growth in sub-Saharan Africa as a whole has fallen to its lowest level in 15 years, though with large variation among countries in the region. The shar