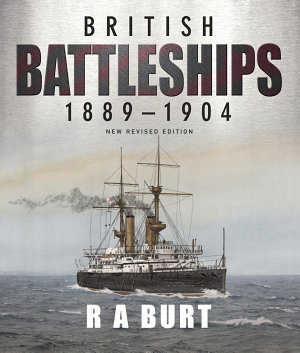 This volume brings to completion the reissue of R A Burt's magnificent bestselling three-volume history of British battleships, and it covers the pre-dreadnought era which has, in recent years, acquired a new and fervent following.??The Russian war scare of 1884 and the public's anxiety about the Royal Navy's ability to fight a modern war at sea resulted in the Naval Defence Act of 1889 and a vast programme of warship construction. Over the next twenty years a fleet of 52 battleships was built, construction finally interrupted by the revolutionary Dreadnought design. In this new volume, the author presents full details of design and construction, armament, protection, machinery and performance, all backed up with accurate data tables listing design figures, trials results, and full particulars at different stages in the ships' careers. The history of each battleship is chronicled and the reader is reminded of their major contribution in the First World War. They bore the brunt of the action at the Dardenelles, bombarded the Belgium coast, patrolled the North Sea and the Channel, reinforced the Italian Fleet, and served in East Africa, the East Indies and the White Sea. Most were extensively modified during the War and this variety has made them of special interest to the historian, enthusiast and ship modeller.??With the addition of many new photographs from the author's massive collection, this new edition is simply a 'must-have' addition to every naval library.

Authors: R A Burt
Categories: History
This volume brings to completion the reissue of R A Burt's magnificent bestselling three-volume history of British battleships, and it covers the pre-dreadnough

Authors: R.A. Burt
Categories: History
A comprehensive look at Royal Navy warships in the pre-dreadnought era, with extensive photos and illustrations. The Russian war scare of 1884 and the public’

Authors: R. A. Burt
Categories: Transportation
The classic reference on the Royal Navy’s battleships and battlecruisers, now expanded with dozens of additional photos. Offering an unprecedented range of de

Authors: Angus Konstam
Categories: History
The term 'pre-dreadnought' was applied in retrospect, to describe the capital ships built during the decade and a half before the launch of HMS Dreadnought in 1

Authors: Ian Buxton
Categories: History
The launch in 1606 of HMS Dreadnought, the worlds's first all-big-gun battleship, rendered all existing battle fleets obsolete, but at the same time it wiped ou

Authors: Michael Epkenhans
Categories: History
During the first two years of World War I, Germany struggled to overcome a crippling British blockade of its mercantile shipping lanes. With only sixteen dreadn

Authors: Stanley Sandler
Categories: History
From ancient times to World War II and the post-war period, this book charts the evolution of the battleship. It provides insightful examinations of the technol

Authors: Robert E. Mullins
Categories: History
This volume examines the transformation of British and US naval policy from 1870 to 1889, which resulted in the British Naval Defence Act (1889), the constructi