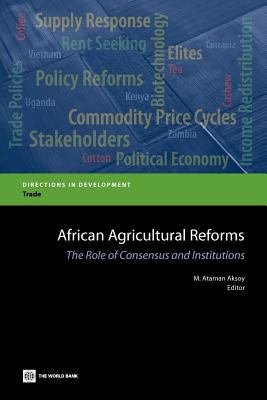 During the 1990s, SSA countries initiated agricultural policy reforms to increase producer incentives and increase growth. Yet, agricultural growth rates after the reforms have been uneven. This has been attributed to lack of supporting infrastructure or the inability to respond to incentives by the smallholders. Based on ten studies, this volume provides a different framework to interpret the outcomes. First, it attributes the success of the reforms to the degree of consensus around the reform programs, which in turn, creates the institutions that can accommodate unexpected shocks. It differentiates between short run growth accelerations and sustained growth episodes. Second, it analyzes the impact of international prices which increased during the early 1990 and collapsed around 2000. Finally, it links the support institutions that evolved after the reforms back to the political economy of the stakeholders and their interests. Aksoy and Anil develop a political economy framework by bringing together the issues of consensus over the distribution of rents, role of unexpected changes, and the capabilities of institutions in handling these changes. Onal tests the of supply responses while Onal and Aksoy analyze international commodity prices and their transmission to the producers. Baffes analyzes impact of the adoption of cotton biotechnology in India and China, and the failure of SSA to also adopt. Baffes and Onal undertake a comparative study of coffee sectors in Uganda, and Vietnam which faced similar shocks. Five case studies cover cashew in Mozambique (Aksoy and Yagci), coffee and tea in Kenya (Mitchell), cashew in Tanzania (Mitchell and Baregu), tobacco in Tanzania (Mitchell and Baregu), and cotton in Zambia (Yagci and Aksoy). Results show that Agricultural policy reforms generated an immediate positive supply response. Real producer prices increased along with output. In unsuccessful cases where the short run supply response petered out, political and social consensus on the reforms was weak, and the ability to redistribute income after a negative shock was not built into the new arrangements. These products had been a major instrument for rent distribution before the reforms. The agencies could not be reformed to give greater non price support. In successful cases, there was greater consensus on the reforms program. The product was not a major rent distribution instrument and the producers were allied with the governments. Lower conflict also led to greater non price support. There was enough political and economic space for the parties to find solutions in case of shocks.

The Road Half Traveled

Authors: Mylène Kherallah
Categories: Social Science
The need for agricultural reform; How far did reforms go? Impact of the reforms; The future of agricultural market reform in Sub-Saharan Africa.

Authors: Kherallah, Mylene
Categories: Business & Economics
The long-term reduction of hunger and poverty in Sub-Saharan Africa remains one of the great challenges for the international development community. Eliminating

Authors: Chris Huggins
Categories: Social Science
International observers have lauded Rwanda as an example of an African country taking control of its own development trajectory, and as a market-friendly destin

Authors: World Bank
Categories: History
This, the second title in the World Bank Policy Research Reports (the first was the headline-making The East Asian Miracle), discusses the economic situation in

Authors: Sam Moyo
Categories: Business & Economics
This empirically grounded study provides a critical reflection on the land question in Africa, research on which tends to be tangential, conceptually loose and