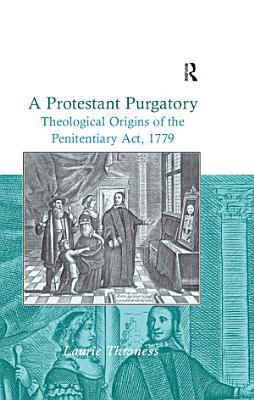 How did the penitentiary get its name? Why did the English impose long prison sentences? Did class and economic conflict really lie at the heart of their correctional system? In a groundbreaking study that challenges the assumptions of modern criminal justice scholarship, Laurie Throness answers many questions like these by exposing the deep theological roots of the judicial institutions of eighteenth-century Britain. The book offers a scholarly account of the passage of the Penitentiary Act of 1779, combining meticulous attention to detail with a sweeping theological overview of the century prior to the Act. But it is not just an intellectual history. It tells a fascinating story of a broader religious movement, and the people and beliefs that motivated them to create a new institution. The work is original because it relies so completely on original sources. It is mystical because it mingles heavenly with earthly justice. It is authoritative because of its explanatory power. Its anecdotes and insights, poetry and song, provide intriguing glimpses into another era strangely familiar to our own. Of special interest to social and legal historians, criminologists, and theologians, this work will also appeal to a wider audience of those who are interested in Christianity's impact on Western culture and institutions.